Welcome to the orginial HP-12C Emulator 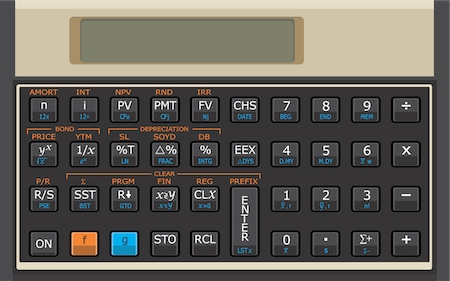 So what to make of the Hewlett-Packard 12c, essentially unchanged since its 1981 debut and, 15 million units later, still one of the company’s top-selling calculators?

How many consumer technology products survive for longer than six months? A year? Most innovations are quickly rendered obsolete by the march of technology and customers’ insatiable demand for the next next new thing. Last year’s 5-megapixel camera yields to this year’s shinier 7-megapixel model. A desktop printer is hot in April and a closeout special by October.

So what to make of the Hewlett-Packard 12c, essentially unchanged since its 1981 debut and, 15 million units later, still one of the company’s top-selling calculators? Everything it does can be replicated–in some cases, with far greater ease–on an Excel spreadsheet. Yet after 25 years, the 12c remains a tool of choice among finance and real estate professionals worldwide. It is still, as one junior analyst put it, “part of the banker’s kit”–an unquestioned marker of credibility, if not good breeding.

How has this little machine, born in the days of Pac-Man, kept such a following? Part of the answer has to do with the culture of the finance industry, which embraces both cachet and conservatism. HP has played to that market brilliantly. But the 12c’s success is also a function of savvy, farsighted design, the fruit of a product team that was, in fact, thinking about the long run. Click here to read the entire article.